Sunday is always a blessed day regardless of where you are at. As long as you can fellowship with the children of God; all is fine! This morning I had the privilege of working with the Dakar Church of Christ. We had a great period of worship. I taught Bible class and had the sermon. Every congregation in Cameroon (to my knowledge) has the sermon before the Lord’s Supper. That means that after you have finished your Bible class you have a couple of songs and a prayer and you are up once more. This is a congregation in which the children outnumber the adults. In 2019 the average weekly number of adults was 36 and the children were 45. Today we had 42 adults and 60 children. The picture below is a panoramic view with the children directly to the left of the pulpit in a cove. As you can see; they are maxed out regarding space. They use a timekeeper with signs that say 20 minutes, 10 minutes, 5 minutes and STOP. I noticed the sign I have below and thought it was interesting. If you cannot read the small print under FAST it says: Show this sign to the Song Leader when he is going too slowly. Maybe my congregation needs to put one of those up for my son when he leads! Actually, Michael does a GREAT job and I am not prejudiced in the least! A brother named Titus picked me at the hotel and we had a nice ride to the hall. When we arrived, there were 10-15 brethren standing outside as the key was missing. After some phone calls a brother came around 9 to let us in. We were greeted with the information that the electricity was not flowing. In that confined space the heat was noticeable. Just before I got up to preach the brother who prayed for me made this statement: may he be your oracle. A brother named Thierry translated for my Bible class and Charles for my sermon. After the service I was speaking to one brother. He told me that one of the problems in Cameroon is that some leaders become harsh when you do not agree with them. He told me that the application of what they know is sometimes lacking. I told him that we do not always do a good job of application in the States. Whether you are in Cameroon, America or any other country; following Jesus is easier said than done. Titus brought me back to the hotel and after 15 minutes, Richard and Lori came down to my room for lunch. We spoke of how we will eat combinations of food here that we never eat in America but they actually taste great! I have also told you on numerous occasions that a cold Coke tastes better here than in the States. Lori then went back to her room to take a nap. Richard and I had a nice discussion. One of the serendipitous blessings of the seminar (and campaigns) is the fellowship with great Christians. I called Linda to see how she was feeling. She did not sleep well last night but was feeling fine. Not only did Alex spend the night but so did Cy. He is the middle child of Dean and Bapp. Last night Buckingham Road had their annual Valentine’s Shebang (or whatever they call it). The last time I was with Linda on Valentine’s Day was 1986! I still took care of her by having flowers delivered, a couple of gifts and a card. If I ever forget to do those things; I will have to stay in Cameroon! The internet allows me to do so many things. For example, this afternoon I corresponded with one of my WBS students and graded his lesson. Then made comments to him. My prayer is that one day he will surrender to the Lord.

At about 5:20 Richard and Lori did some serious arm twisting. They wanted me to take them to an ice cream place. I, of course, did not want to go but felt that I needed to be a good leader and mom. We hailed a taxi and arrived and they made me get two scoops (I only wanted one) and some French fries. The sacrifices you have to make for your children can be great! I then did some work and Jean Claude came over to collect everything (pens, paper, marker pens, name tags, etc) for the seminar this week. Nearly 60 brethren are already here as they had to travel as no travel is allowed on the English side on Monday. I was able to Skype with TMBWITW. She is still struggling to sleep. Thank you for your continued prayers. I cannot thank her sister Ellen and Alex enough for what they are doing for her. We are excited and ready for the seminar tomorrow. Thanks for all of your prayers on our behalf. 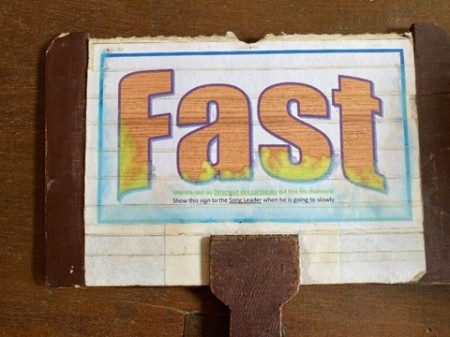 This entry was posted on Sunday, February 16th, 2020 at 2:43 pm and is filed under Uncategorized. You can follow any responses to this entry through the RSS 2.0 feed. You can leave a response, or trackback from your own site.