If success was measured by baptisms then today was a failure. Fortunately, the Lord has only commanded that we preach the gospel and that was done today.

I do not want to sound in an uncaring or flippant way. The picture on the left below was taken by me back in August after Hurricane Harvey. It was a true tragedy as people lost their lives, their loved one and so many were injured and left homeless. Street after street was littered as you see below with household stuff that was only good for the dump. However, that tragedy pales in comparison to the lost souls who are speeding towards hell. We realize that as we share the gospel, the big majority will say no to the Lord and that leads us to tears. So many will hear “depart from me” on judgment day and at that time they will be prepared to do whatever the Lord commands. Alas; it will be too late.

Here is the day:

Got up at 7:15 for an 8:45 departure to the hall. We have been blessed these last days because a brother named Scott has been driving us around. Another brother from Yaounde graciously gave us the use of his car and it has been a blessing. Scott was a few minutes late in picking us because he was collecting other brethren and carrying them to the church hall. We were only 10 minutes late and everything went well. There were 20-25 present which is good for this congregation. They meet in the house of a new sister. I took both the Bible class and sermon and feel as though everything went well and was received in a positive manner. After worship we studied with the two sisters you see below along with another man. Obviously, the Lord is the only one who knows both the heart and the future but I felt good about this study. They are all regular attenders and with time; we pray that the brethren will be able to lead them to the Lord. When we finished teaching them there were no more prospects so I came back to the hotel. The electricity had been out and stayed off for around 2 hours. The juice is back on and that is nice.

Jean Claude and I had our final supper in Sangmelima. Enjoyed the food but especially the fellowship. We are discussing a project for the preachers of the North. They would have a “communal farm” and the proceeds would go to support the preachers. This way the American is not on the hook for years and even decades of support. I am going to get details and if it looks promising; will pass the info along and try to begin raising support. Please pray that if this is the will of God; it will be carried out. You might say that if it is the will of God that it will be carried out but not necessarily so. We know from Scripture that while it is the will of God that all come to repentance; Hell will have a far greater population than Heaven. We will need willing vessels to help with the funding and I am convinced we will have them. I was able to take another nice cold shower and am pretty much packed for our journey tomorrow. The plan is to leave at 7:30 for Yaounde. We will then work on Tuesday, Wednesday, Thursday and Friday with the 4 congregations in that city. I am fixin to Skype with Linda and will then relax. We are doing well and thank you for your prayers. 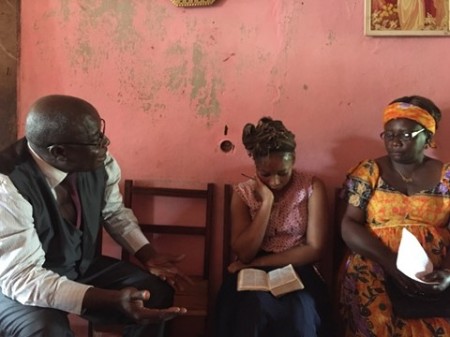 This entry was posted on Sunday, October 22nd, 2017 at 1:03 pm and is filed under Uncategorized. You can follow any responses to this entry through the RSS 2.0 feed. You can leave a response, or trackback from your own site.