The apostle Paul will tell us in Ephesians 6 that we are in a war. I understand the horror of Isis and other terrorist groups and I would never downplay the carnage that they cause. I do know, however, that each day thousands upon thousands enter Torment and they will never leave suffering. One day we will be judged and they will spend the balance of eternity in Hell with the devil and his angels. Quite frankly; I am ashamed of myself so often as my eyes are on the things of this world. When we come on seminar or campaigns the focus becomes clearer. The devil hates us in ways that we cannot imagine and we need to be doing all that we can to defeat him. That, of course, is what this ministry is all about.

I want to draw your attention to Jean Claude because I know him well enough that he would say the paragraph above should take precedence over his physical health. He will have surgery on March 2 and this was a surgery already scheduled to fix a problem from the earlier surgeries. I already have all of the funds needed for this surgery and appreciate everyone who contributed. He will be on some medicine for the next 6 months and the mission of that medicine is to dissolve the stones where he can pass them without undergoing surgery again. Please also pray for Mary (his wife) as she will need surgery in mid to late March. She is very frightened but it is a surgery that needs to be done.

Here are the events of the day: nothing new to report about the morning as it went as usual. For the past few nights I would wake up numerous times during the night but I always went right back to sleep. Last night I slept throughout and never woke up until this morning. Ricardo and I walked down to the sister’s class so I could give them their box filled with pen, paper, badges and seminar books. We then took off for the hall and arrived in plenty of time. The attendance today was higher than yesterday but lower than last year. In 2015 the men were 39 but today they were 34; in 2015 the women were 33 but today were 26 and last year the afternoon class was 54 but today only 47. The numbers are not as dramatically low as Kumba and we all feel as though the first two days have gone well. I had no “gopher work” so was able to listen to all of Ricardo’s class and as always, he did a great job. The guys interpreting have already improved from the first day. Jean Claude was absent from 10am till the afternoon because he was at the clinic. I had 3 short meetings with different preachers and one of them is pictured below with his wife. They are Julien and Natalie. The picture on the left is of Ricardo’s class. I was able to speak with Simon Parfait in some detail today regarding his right eye. It has a wound that needs surgery and no one in Cameroon can do the operation. He has been told that he needs to go to Paris. His family can take care of the flight expense but the surgery will be at least $6,000 and possibly a little more. This brother is one of the finest Christians and one of the humblest preachers I know. It is my prayer that we can raise the funds to assist him. I do not need all because there is another brother in America who is going to try to help. I took a machine back and took a quick, nice cold shower. Wow, that water feels sooooooooooooo good. I then had to go to a nearby market to buy candy for the sister’s tomorrow. Then came back and did some work and Ricardo and I were picked by Julien and Martin at 2:40. I feel a bit better about my class versus Kumba. Part of the reason is the first place are the Guinea Pigs and we learn some things to say and not to say. It is very hot but I truly don’t notice it that much. Obviously I know it a little or I wouldn’t be mentioning it. We came home and took another quick shower and ate in the hotel restaurant. The food was delicious and we stayed about an hour having a good discussion about all kinds of things. Then Jean Claude and Mary came to my room as they had been at the clinic which is within 100 yards of the hotel. I helped them with some financial needs regarding his doctor consultation and tests he had run. It is because of faithful brethren like you who give that allow us to help so many. It will still be an hour and half before I can Skype with Charlie Brown and Grandma. We are doing fine and thank you for your continued prayers. 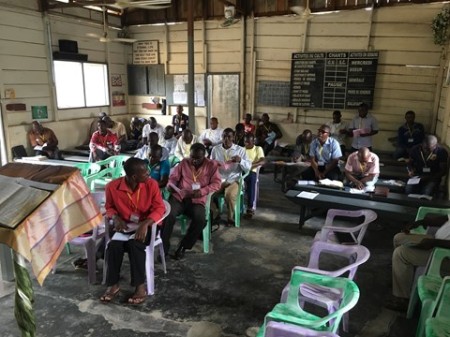 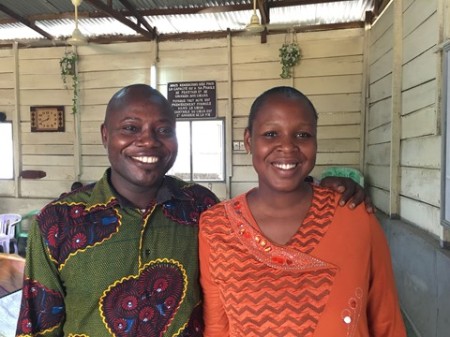 This entry was posted on Tuesday, February 16th, 2016 at 2:54 pm and is filed under Uncategorized. You can follow any responses to this entry through the RSS 2.0 feed. You can leave a response, or trackback from your own site.