Generally when we work in Yaounde we work with several congregations. This time it was different for two reasons: 1) I was the only American and 2) the nature of the itinerary simply did not allow us the time here to do multiple churches. I bring that up for this reason: typically we stay in a hotel that is near the center of town which is a long way from Nkoabang. If you can pronounce that correctly then I will give you a dollar, excluding any Cameroonians who are reading this! This hotel is literally one minute away by car which is really nice.

Today was a GREAT day. First of all, I was able to share the gospel with 2 precious souls and one of them surrendered their life. I will speak more about her in a minute. Secondly, the church is active in this campaign and recently they have had 8 baptisms of those who were on the list of prospects. There are many new babies so please pray for this congregation. Now, I will start at the beginning of the day: Got up at 7:55 as Simon (pronounced See-mon with a long O sound) was to pick us at 9:15. I don’t know how my comments regarding the hotel are coming across as my prayer is that I am not too focused on the physical. I simply thank the Lord that He is blessing us as He is. On balance, this is one of the nicest hotels we have ever stayed in. We arrived at the hall and began teaching a young girl of 25 named Justesse. The study went well but she is very tied to her denomination. Her father is a pastor and she said that he has confessed: “if we teach the truth we will be sacked.” Sacked is their word for fired. There are many denominational preachers who are simply chasing after money and some of them are doing very well. Our goal with those we support is to give them enough to care for their families but not so much that money becomes the reason for their ministry. Even within the church we have those young men who strive for wealth. I then had a religious discussion with Simon. I have told you on numerous occasions that one of the blessings of the campaigns is the times we can share faith with one another. You will recall that the Apostle Paul tells the Roman brethren that he wants to be mutually encouraged by the sharing of faith. We were supposed to have a study at 12:30 but it did not materialize so I came back to the hotel for lunch. It was excellent again but we were called to go back to the hall as the prospect had showed up. It was a 16 year old girl named Rose. I am always concerned with a child of that age as parents can simply forbid the child to be baptized. As it turns out, she lives with her grandparents and she is convinced there will be no problems. The study involved many questions on her part (a good sign) and she accepted the Lord. Oh, during the study Jean Claude had taken some medicine for sinuses and he began to dose. I actually was not aware and was surprised when a brother named Peter started translating. Jean Claude later told me that Peter had been laughing at Jean Claude! We hopped in Simon’s car for the journey to the “baptistery”. Took about 10 minutes and started to rain. Fortunately, I brought my umbrella and gave it to Rose and a sister named Mary so Rose could change. It was quite nice to watch Rose enter the Kingdom of God in the rain. She is pictured below. We came back and had some further exhortation for her and then headed for the hotel. Simon then picked us at 5:20 for the evening worship. It is always inspiring to be with my Cameroonian brethren and the service was very uplifting. The song leader is a brother named Prosper and this guy can REALLY lead!!!!!!!!!!!!!!!!! If you are sleepy when you come in, after he is through with you that will not be a problem. After the service one of the brothers wanted to talk with me about a doctrinal issue. We had a good discussion.

1. I am not a prolific writer and my memory is not too hot so sometimes I will think of something to tell you but my computer is not near. I was surprised by the water pressure in the shower. Typically it is OK but not overly powerful but this shower has more pressure than my shower at home.

2. It is such a joy to have Jean Claude interpreting. The same was true of Louis. Sometimes I will say something and think to myself: that didn’t come out well but he is able to translate.

3. The service at the hotel restaurant is the best of any I have ever been at. When you give them a time they are precise in having the food on the table.

The picture on the right below is of the well behind the church hall. Actually the hall is part of a compound where Simon and his family live. There are also a couple of other apartments where brethren who have no place to stay live rent free. The compound belongs to Simon’s mother and she lives in Europe. We pray they will continue to be able to use it. They bought some land behind but it will be some time before they have the funds to build. Plan to call Linda in a couple of hours and see her and Charlie Brown. We are supposed to have prospects tomorrow so please pray that they will be receptive. We are doing well and thank you for your prayers. 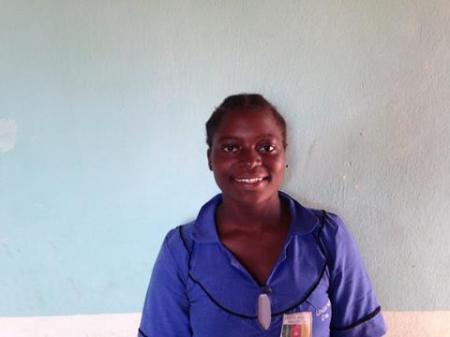 This entry was posted on Wednesday, October 28th, 2015 at 12:37 pm and is filed under Uncategorized. You can follow any responses to this entry through the RSS 2.0 feed. You can leave a response, or trackback from your own site.