My dad was a straight ticket Republican (don’t worry; I know where I am headed). If Hitler had been a Republican my dad would have voted for him and if Jesus had been a Democrat the Lord would not get my dad’s vote. The reason I bring this up is the ‘locked in’ mindset of so many when it comes to the subject of religion. I suppose some could accuse us of the same but I try to defend my positions with Scripture whereas most simply mimic what they have been taught. Sad to say but many within the Lord’s church fall under that umbrella. For the second day in a row I taught a man of the charismatic persuasion. I truly believe his sincerity and love for the Lord. In Matthew 7 we see such people who did miracles in the name of Jesus, cast out demons in the name of Jesus and did many mighty works in His name. These were not nominal believers but true believers whom Jesus refers to as evildoers because they were not doing the will of God. Only the Lord knows the precise percentage but I would argue that most denominational people are sincere in their beliefs. That, however, is not enough. I can sincerely believe in a doctor but if he prescribes wrong medicine or botches my surgery the outcome could be bad or even fatal. Those who sincerely follow false teaching will perish and I am not convinced that all of us within the Lord’s church believe that. The young man I spoke with is named Emmanuel and he is 43 years of age. Please ask the Lord to bless him in seeking the will of the Lord. We had a good discussion and I was able to show him some things that he had never thought of in the past. I believe that this young man truly loves the Lord and wants to please Him. Julien will follow-up with him.

As always; I will start (well, I guess I truly won’t start) with the beginning. Slept well and thank God each morning for this great blessing. The A/C and water have worked the entire time and for that I am thankful. Went over my lessons again this morning and Julien picked me on his machine. Sunday is not a very exciting day to ride a machine because the traffic is light. We didn’t have to dodge anything and there were no near misses which is discouraging. Even crossing the street is no adventure. RATS! We arrived 15 minutes early and there were already a number of brethren. I have noticed over time that the churches are becoming more punctual and my work with WBS in the States finds just the opposite. I decided to do something different in Bible class so we had a discussion rather than a lecture on how to grow a church. It is unfortunate that many in Cameroon are still fixated on church buildings while all of the empirical evidence in that country demonstrates that buildings have, at best, a negligible impact. The song leader was really good and we sang many songs. I then preached on the idea of giving ourselves to the Lord. Cameroon, like the States, has many within the church who are nothing more than pew packers. The how to of church growth is not hard to understand. It is the implementation of the how to that is difficult. After services I went to Julien’s office and that is where we had our study with Emmanuel. Julien then took me back to the hotel and I went to a restaurant and got lupper (lunch/supper) or is it linner? Why is my spellchecker flagging lupper and linner? I am looking forward to a relaxing evening and a good day tomorrow. I will be working at Jean Claude’s congregation. The picture on the left below is of Julien, Natalie and their children. On the right they are from left to right: David (5), Deborah (9) and Jason (1).

I will never tire of saying thank you for your prayers. 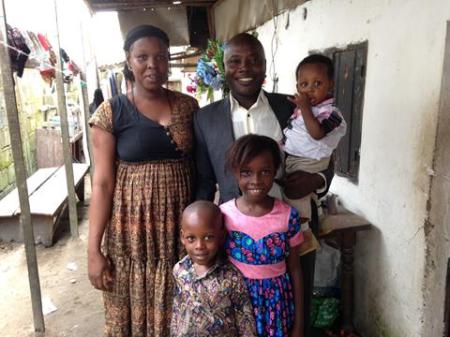 This entry was posted on Sunday, October 18th, 2015 at 11:00 am and is filed under Uncategorized. You can follow any responses to this entry through the RSS 2.0 feed. You can leave a response, or trackback from your own site.