Lots to talk about today. Regarding the numbers; they are quite comparable to last year. Men were 40 last year and 42 today; women were 41 last year and 34 today and the afternoon class was 57 last year and 55 today. All of us feel as though the seminar is going quite well.

Here is how it went: 6:45 alarm as usual. Nothing spectacular before we left. Knocked Richard’s door at 8:10 and we got on machines to LeWat. Linda and Lucy were already there so we gave them some more candy and taxi money for the ladies. Got to the church hall at about 8:45. Around 9 I went with Martin on his machine. Had to go to the store and he had never been in that part of Douala. We got in the approximate area and he started asking people where the store was and the 3rd time was the charm. Went back to the hotel to dump the stuff and then went to LeWat. I gave the women their ‘pep talk’ and then bought them all a Coke. I always tell them to not tell the men because I know they will! The men ask me why the sisters get candy, cokes and A/C and I tell them because they deserve it! I was going to have a Coke myself and being the nice guy I am; I invited Martin in to have one with me. He told me that he had never been inside the hotel. He was very impressed. His English is on par with my French but I did take out my IPhone and showed him some pictures of my family and some video I had taken on the back of his machine. We then went back to the hall and finished Richard’s class. Martin took Richard back to the hotel for a break while I stayed for meetings. The first was with the congregations we will work with in October. My brother Don and I will travel to the North and we wanted to meet with those churches while they were here. I then met with two of the brethren from the congregation that is having the problem with the preacher who was disfellowshipped. Don’t have a good sense as to how this is going to turn out. We can just pray and put the matter in the hands of the Lord. I then met with a brother who wants to start preaching in Yaoundé and he just wanted some advice. It was then time for my class and it went well. Closed at 6 and Martin and Rigobert took us back to the hotel. Richard was wondering how the machine drivers know when to move and when to stop, that is, who’s turn is it? Now, I know I told you last week that I was only going to share one recipe with you but what I had tonight is just too good to keep to myself. Take the following and put them in a container; Canned Ravioli, corn, tuna, canned baked beans and crumbled up Pringles (any flavor will do). Stir well and eat at room temperature. Listen; the ‘room temperature’ thing is very important as it seals in the vitamins and minerals. When you heat your food you cook away most of those things that are good for you. I have already downloaded my pictures and videos. BTW: below is Simon Parfait and Richard during a break this afternoon. Simon is holding his daughter Esther. The other picture is of the sister’s class. I have taken my shower and Skyped Linda so only have a few more things to do. Things are winding down with only 2 days to go. Oh, pray for Richard. He had some serious chills last night and stomach problems. He said that his shirt was soaked as though he had bathed with it on. Is feeling better but his stomach is still giving him some small trouble. My dizziness is history. Thanks for your continued prayers. 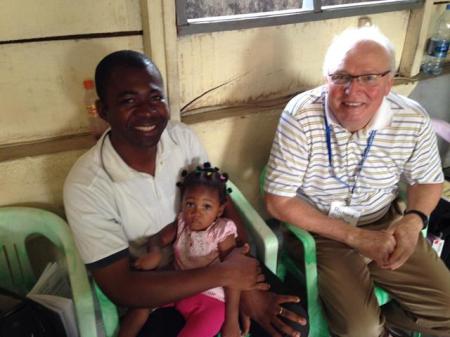 This entry was posted on Wednesday, February 19th, 2014 at 2:20 pm and is filed under Uncategorized. You can follow any responses to this entry through the RSS 2.0 feed. You can leave a response, or trackback from your own site.