1. Tonight at the service Julian, the preacher for the Dakar congregation came up and said that someone had put a dollar bill in the plate on Sunday so I changed it for him. This is about the nastiest looking dollar bill I have ever seen.

2. The other night in Buea Rob and Tucker were bad boys. They got Louis’ key and went into his room and took toilet paper and wrapped everything. I learned from Rob that he had done that in the past (no shock for a teen) and asked him what his parents would think. Then I was shocked to hear that David and Lisa (his parents) had assisted him in the past. I asked Kurt what he would do if his teens had wanted him to ‘teepee’ a house and he had the same response that I did. Of course we would not contribute to the delinquency of a minor. I hope that David and Lisa have repented.

3. When we were coming up the lifter (elevator) today Rob and Tucker were emitting sounds. Now the sounds I can handle but the odor that accompanied the sounds is another story. Their parents need to have a serious conversation (good luck with that) with them about polite etiquette. It was especially appalling to me because I am a very delicate person. Just ask anyone who knows me. Wait, strike that last sentence!

4. What I am fixin to say is not a joke. The men here will talk about how fat their wives are with the woman in question present. It is no big deal and the women simply smile. If you want to sleep alone for a while just tell your wife that she is fat, even if she ain’t! Go on, I dare you; I double dog dare you!!!!

5. Oh, one of the conveniences in most of the hotels in Cameroon is that there is a light switch right by the bed. You can hop in bed with the light on and then cut it off.

That’s about it. Tomorrow morning we go to the wood market to buy souvenirs and then prepare for our long journey. We don’t fly out until 11 tomorrow night and when we land in Paris we have a long layover and then about a 9 hour flight to Chicago followed by a flight home. Now I am not joking about what I am fixin to say: pray that the connection in Chicago is smooth because we only have 1 hour and 25 minutes between flights and we have to clear Customs in Chicago. In all probability we will fly out of a different terminal than what we fly into so we are praying that everything is on time. We are all doing well and looking forward to being home. Please remember to come to Buckingham Road on the evening of July 14 @ 6pm to hear our report. Thanks for your continued prayers. 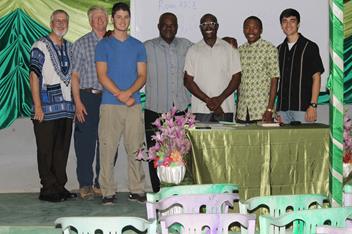 This entry was posted on Monday, July 1st, 2013 at 5:15 pm and is filed under Uncategorized. You can follow any responses to this entry through the RSS 2.0 feed. You can leave a response, or trackback from your own site.