It seems strange that we are finished with Kumba and still only ½ way through. In previous years we have done Douala first but Jean Claude and Louis wanted us to do Kumba first. They said that Kumba always gets the best seminar because we work out the bugs the first time through. I think there is some truth to that. I know that Richard says he is going to do some things differently in Douala. This was by far the best attended seminar that we have ever had. In 2010 we averaged 158 and then 163 last year. This year we averaged 201! I feel very good about my class and the seminar in general. The evaluation sheets were turned in today and I was able to read Lori’s but not mine or Richard’s. I will read mine on the bus to Douala tomorrow. Lori’s were very good which is what I expected. This part of the trip has been very smooth from a physical point of view. Richard said that the power went out at 4am this morning but I slept through it and when I woke up the power was on and my A/C was percolating just fine. It does not seem to be as hot this year as in past years. I would be surprised if it has made it to 90 and we have had enough rain that kept things cool. I realize that ‘creature comforts’ are not that essential but they are nice and we are grateful to the Lord. I got up this morning at the normal time and did get on the computer and was able to do some reading. We took machines to the hall and my guy dropped me at the photocopy place as Lori had some songs that she wanted to give the sisters. I spent most of the morning reading Lori’s evaluation sheets and listening with one ear to the presentations by the men. Richard did a little tweaking which was helpful. His mission is to help them learn how to write a mission statement followed by goals and then plans to carry out the goals. This is new stuff to virtually all of the men but Richard is impressed with their desire to learn. I had to leave a bit early to come back to the hotel to write a bunch of letters. Various brethren had asked for different things and I needed to respond. When Richard and Lori got back we ate lunch in their room. Had one of my world famous concoctions. I have had numerous people encourage me to write a cook book but I have delayed the project. I went over my lesson before I headed back to the hall. Today I was teaching Romans 10:14-11:36. This is a difficult text and made even harder because of the range of educational ability of the men. The range in Kumba is much greater than in Douala. Still feel that the class went well and had many compliments after the class. We took a taxi home after having picture after picture taken by brethren. The sister that I mentioned yesterday needed more units of blood today. There were 12 donors but only 4 accepted as the other 8 had Malaria and/or Typhoid in their blood. Many people die because of an inability to get donors to give blood. This sister was blessed that the seminar had brethren who could help. I have been packing tonight and I am ready for the journey tomorrow. We will leave Kumba around 7:30 and should reach the hotel in Douala by 11. We are going to let Jean Claude go home and rest and Richard, Lori and I will go to a grocery store to buy stuff for next week. I was able to talk with Linda and she is scheduled to have a Root Canal this coming Monday. If there is a crack in the tooth they will have to pull it so she is praying that they can save the tooth. Regarding the photos below: the phone picture was a creation of Jean Claude on his computer. He does not like phones going off during class. The other picture lets you see that the toilets here are no different than yours! Well, I am fixin to hit the sack. Oh,the water had went off earlier and Richard and Lori went to bed too early because it came back on so I had a good, hot shower. We are all well and looking forward to the seminar in Douala. Thanks for your continued prayers. 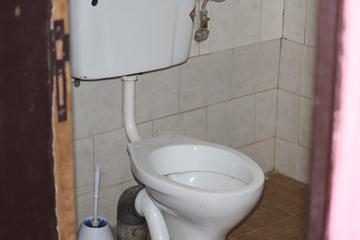 This entry was posted on Friday, February 17th, 2012 at 4:28 pm and is filed under Uncategorized. You can follow any responses to this entry through the RSS 2.0 feed. You can leave a response, or trackback from your own site.